Joker at the opera- Mainfranken Theatre of Wuerzburg, 12 ottobre 2019 - I Teatri dell'Est

Joker at the opera- Mainfranken Theatre of Wuerzburg, 12 ottobre 2019

Rigoletto opens the season at the Mainfranken Theatre of Wuerzburg

Rigoletto is probably one of the most frequently performed operatic titles in the world. It has been put through tremendous interpretations or misinterpretations. Taking Rigoletto’s tragic story out of its historic context and adding some “mafioso” flavour to it – is almost a cliché. Especially outside of Italy. But the production of Rigoletto in Wuerzburg opera was a pleasant surprise, where modern context maintained the aesthetics of the Italian opera and the word/music/action equilibrium. We have to give highest credits to the producer for the perfect engagement of the audience: 20 minutes of applause after the show says it all! 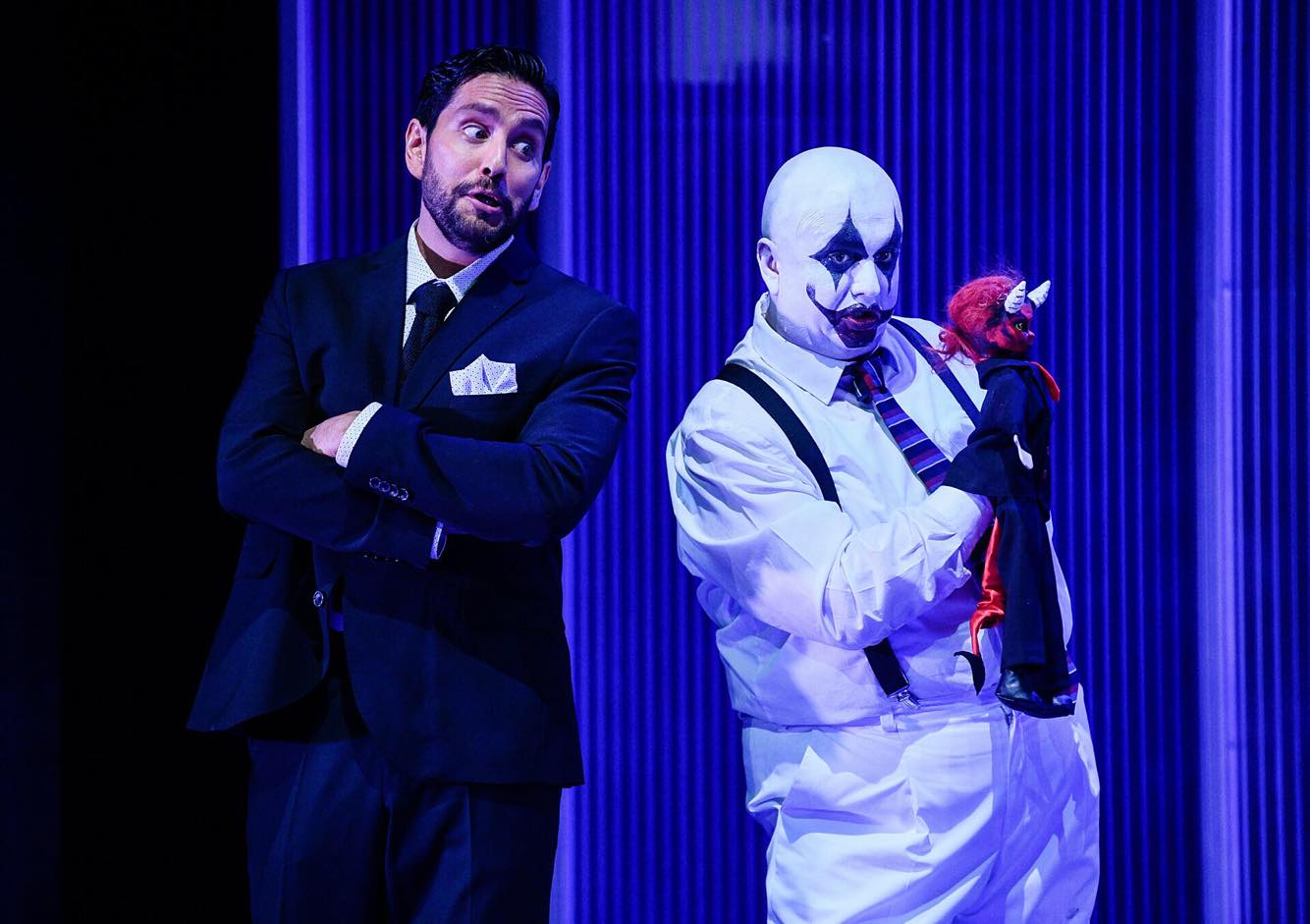 The “modernisation” of Mainfranken Rigoletto took place in a reality beyond space and time: Magic realism – as the director Markus Trabusch suggested himself. In this world realistic elements – the ambience of a Martini Bar, characters dressed in jeans and sneakers live in symbiosis with the magic – as of the presence of the soul of Gilda’s mother… At the same time director made space for cultural dialogue between orient and occident, displayed in almost Puccinesque gesture of the Duke, presenting the cherry blossom flowers and kimono as a gift to Gilda. The realism of the story is harsh and brutal, but there is still a room for poetry, fairy-tale love and self-sacrifice and most importantly – Verdi’s music, that has it all! 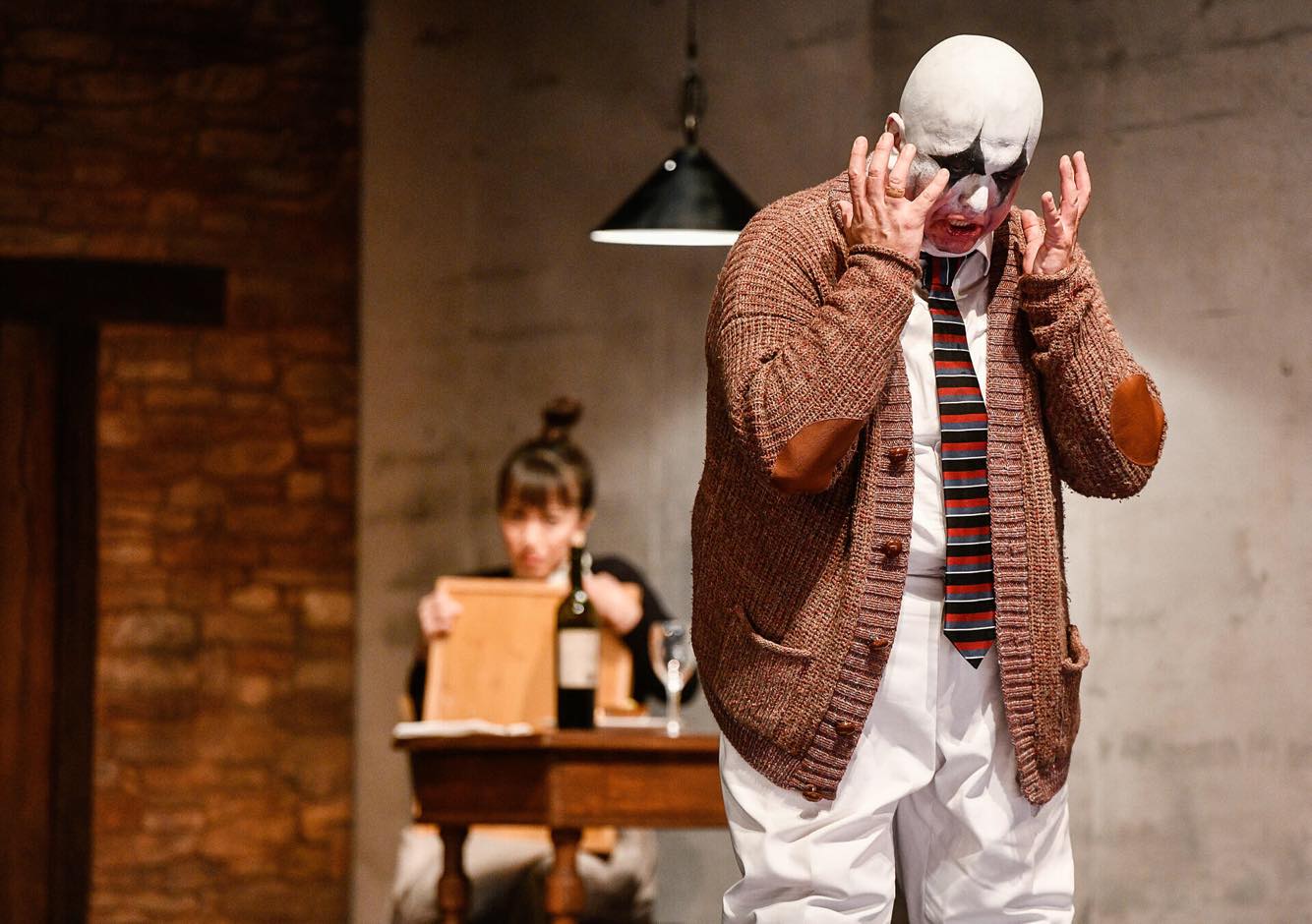 The story starts in the Martini lounge, where the bored Duke throws a party. His main entertainment is exploiting people around, mostly women, who fall in his arms in every colour, shape and age… those who do not fall willingly – will be abducted. Later the stage literally turns into Rigoleto’s home, his personal fortress, where he keeps his daughter – hidden out of rotten society’s eyes. In the third act the stage turns again – this time into a shady bar, where rich and poor find their consolation in a glass of wine and a pretty prostitute… and where the terrible crime can be done with no remorse or trace of guilt.

The simple, yet efficient solution of the settings, effective play of light and texture and looks of the characters – on one hand easy-going jeans and t-shirt or “glitter and be gay” of the party animals – mix and match with the phantasmagorical personality of Rigoletto, as a joker with a crocodile tail. Later his look is copied by his “partners in crime” – the courtiers, who come to hunt for the next pretty toy for their master. This very interesting transformation underlines the strange quality of social decay: “together we are all brutal animals, hidden behind masks, with no moral standards or responsibility over our collective actions… until the tragedy knocks on our own doors”! We have to admit, perfect teamwork of the set and costume designer Susanne Hiller, light designer Mariella von Vequel-Westernach with the director Markus Trabusch – challenged us, without going against the flow of the music and original concept of the opera. 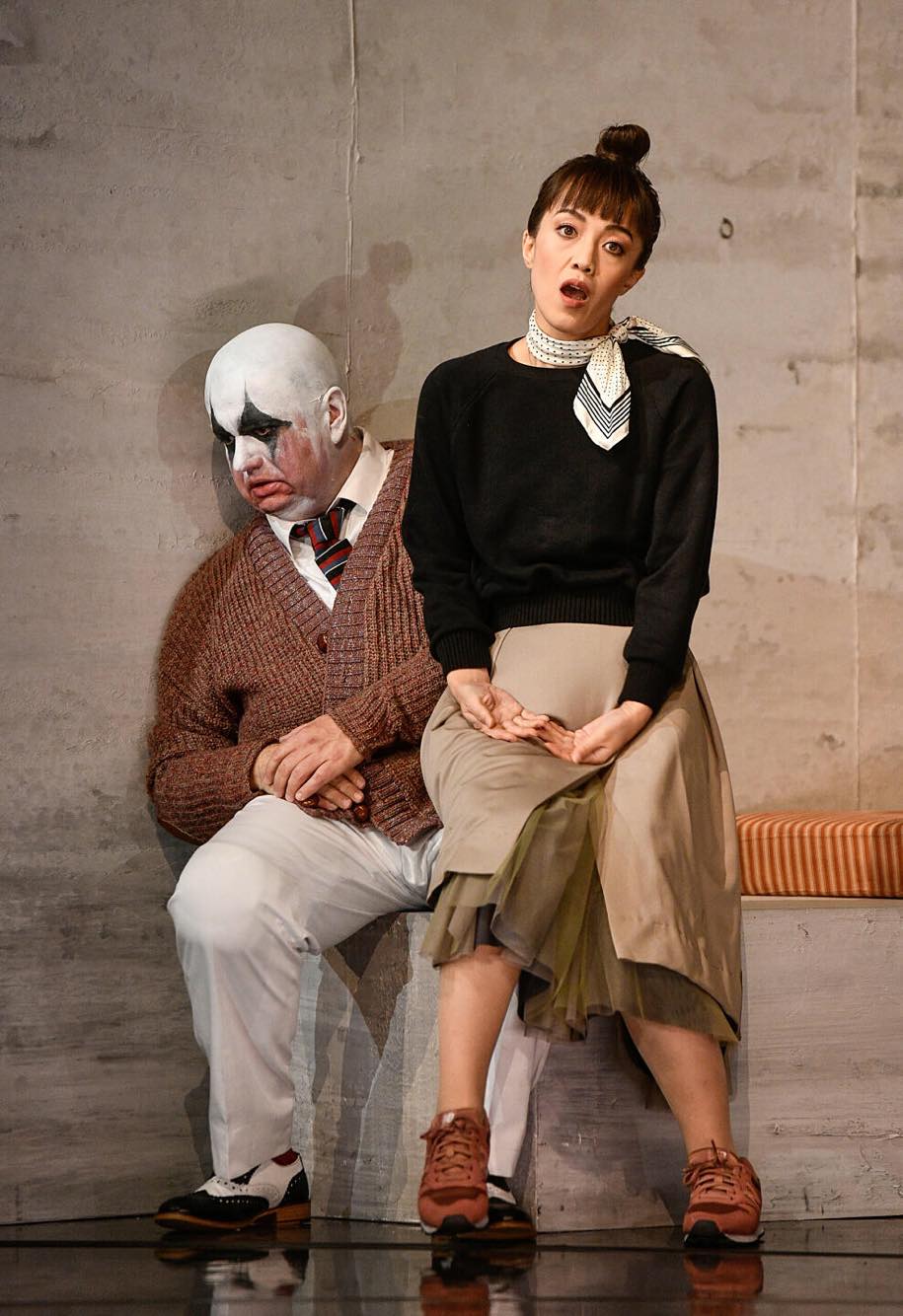 Now to the main part: the musical qualities of the performance, entrusted to the baton of Enrico Calesso – inspiring, very “singer-friendly” conductor, who leads Mainfranken theatre as general music director for last few years. Having at his disposition a compact orchestra and a choir of Mainfranken theatre, he drew a radiant, yet delicate flow of the opera, filling it with lively tempos and buoyant energy, right from the prelude emphasising contrasts of tragic darkness of Rigoletto’s world and playful carelessness of the Duke’s universe. He gave a lot of breathing space to vocal lines and allowed the expressive bend of key phrases. His interplay with the soloists is worth mentioning, particularly with those, who were capable of going beyond the standards and filling the music with very personal, dramatic phrasing (with Rigoletto for instance).

An absolute protagonist of the show was Federico Longhi – not only due to his key character, but mainly to his vocal qualities: technical perfection mixed with excellent musicianship. One could see that he is already an expert of the role – having performed it in some of the main European theatres, such as: Filarmonico of Verona, opera of Nice and Landestheater Linz.

We had the privilege to follow his productions of Rigoletto and we are sincerely impressed with his ability and humility to adapt his personal interpretation with the concept of diverse productions. His Rigoletto never stops developing. His sound – even more steady and strong during his rage of vendetta and even more delicate in the intimate duets with the daughter. The successful tandem with Maestro  Calesso also played in his favour. The conductor enthusiastically supported his deep and thought-through resolutions of the great musical moments of the opera, such as his plead to release his daughter (in the scene with choir and “cortigiani, vil razza dannata”), tragic destruction of the image of her innocence in the following duet with Gilda and finally the fatal failure of his revenge plan in the last scene. 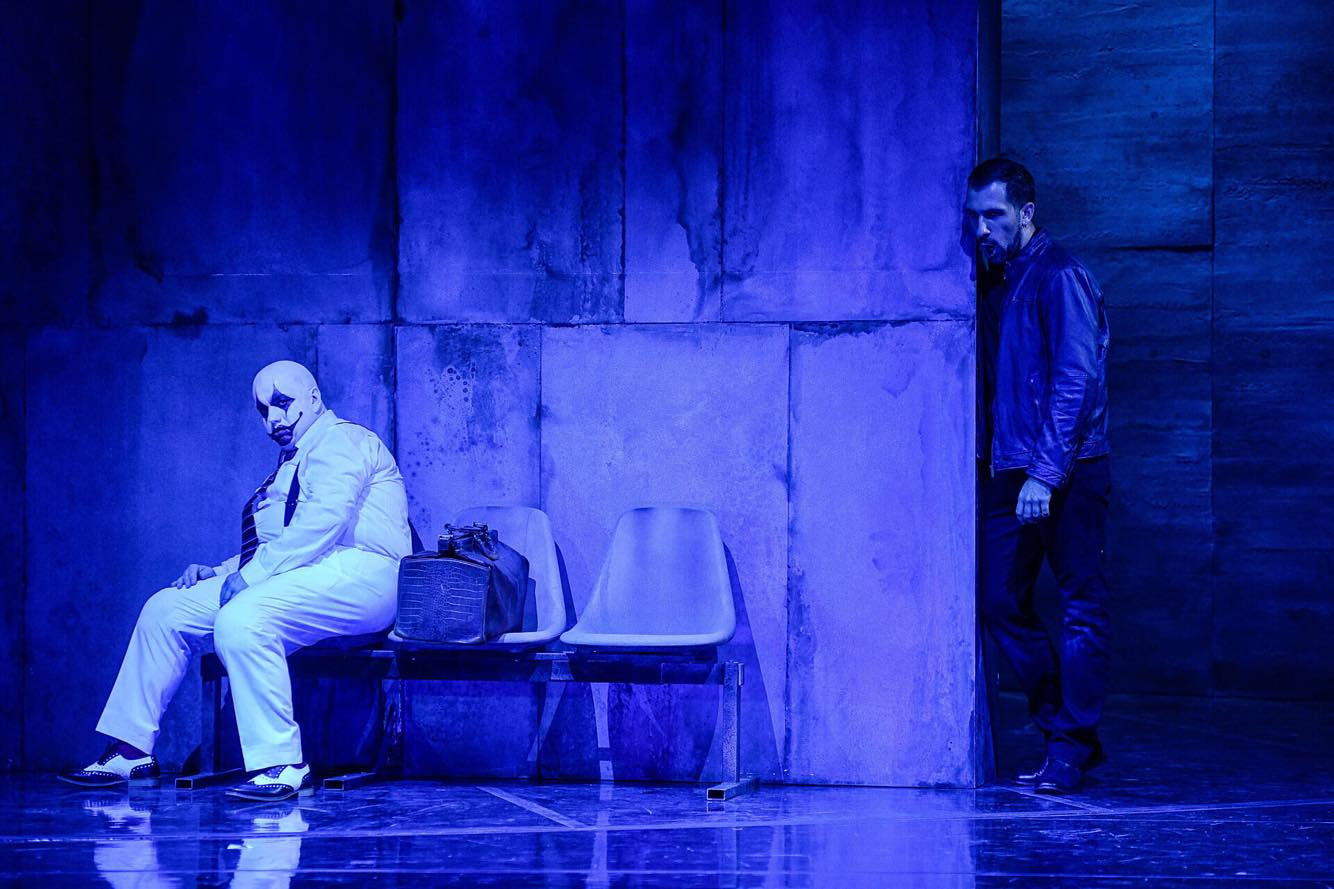 Alongside with Federico Longhi, audience admired the Gilda of Akiho Tsujii. Her soft and light, yet caring voice had all it took to create delicate, yet heroic character of the innocent victim of mass-brutality and carelessness of the society. Technically excellent in the first act, she provided a heart-warming rendition of the second act scene (“tutte le feste al tempio” followed by the duet with the father). In the last act her colour became more intense and gained weight, which gave her character a strong dramatic edge.

The young tenor Roberto Ortiz was not exactly on the same level as above mentioned protagonists, maybe due to the fact, that the Duke is not meant for a very light tenor. But he carried it through with dignity and conquered the hearts of the audience. Protagonist casts completed Katharina von Buelow as Maddalena and Igor Tsarkov as Sparafucile. The smaller parts were covered by Barbara Schoeller (Giovanna), Kosma Ranuer (Monterone), Daniel Fiolka (Marullo), Mathew Habib (Borsa), Taiyu Uchiyama (Ceprano), Scherhezada Cruz (Contessa Ceprano), etc.

The audience of Mainfranken theatre embraced the new production of Rigoletto with impressive standing ovations and endless curtain calls! 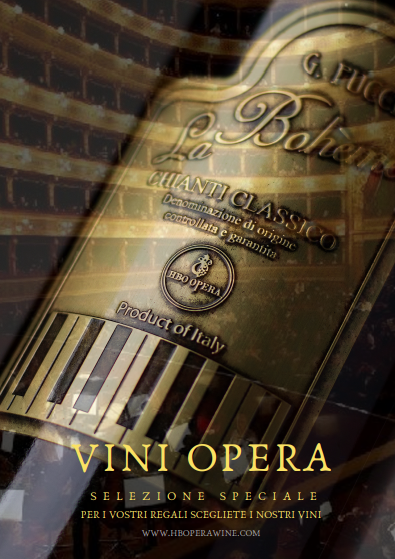